The Ultimate Guide For Movie Making 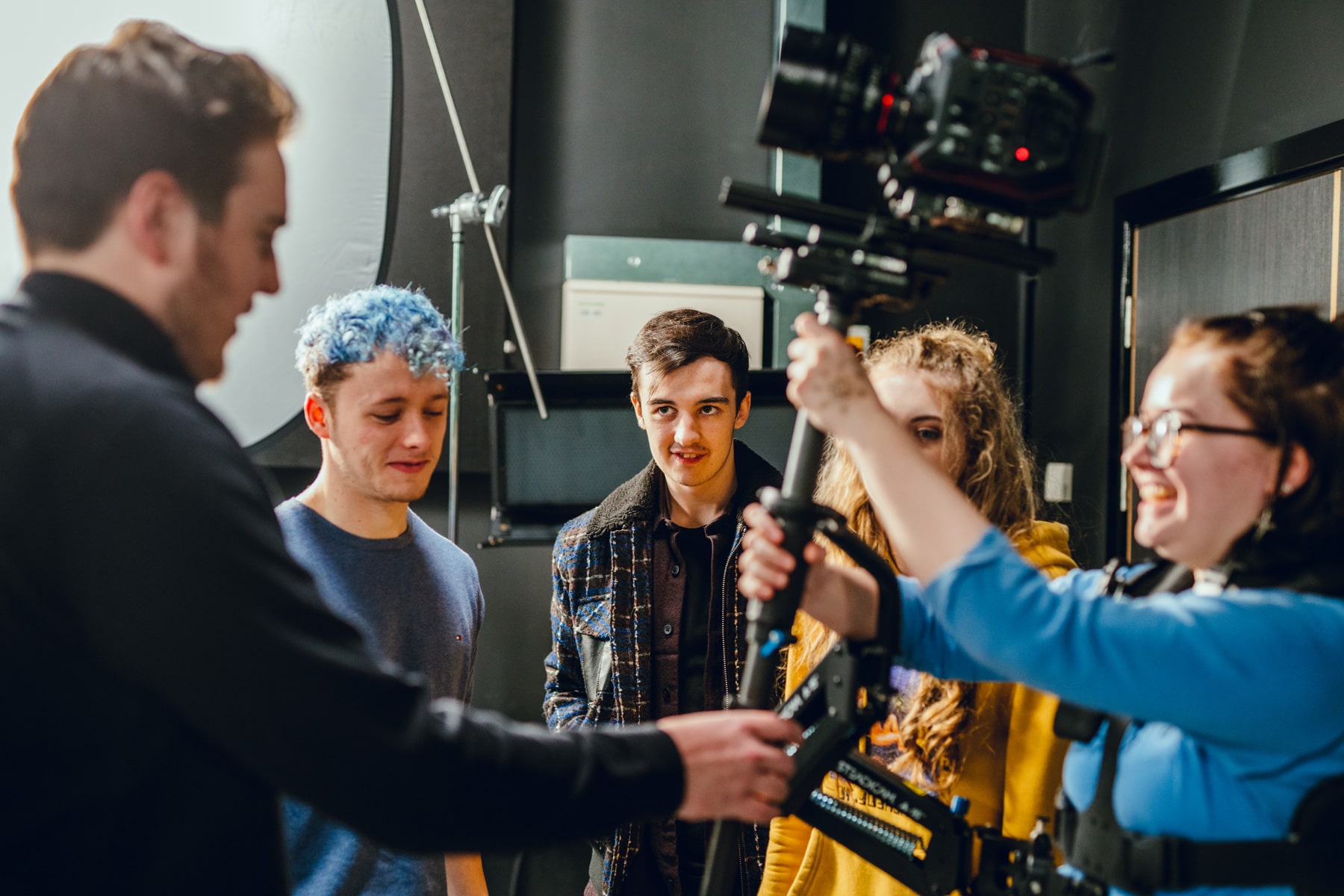 Making movies is no easy task. It is one of the most challenging but rewarding things you can do.

The beginnings are always the hardest part. Some want to make an epic masterpiece but don’t have the means to do so; others get caught up in their vision and fail to realize how much their passion project might cost them in the long run. The important thing is not only deciding on how much money you want or need but also keeping an eye on what’s left over once all your expenses are paid off—that way, if something goes wrong during production (and something will), then at least there’s still some cash left over for post-production work or marketing costs after wrapping up filming!

Making a film can be an ambitious undertaking, and if you don’t know where to begin, it’s easy to feel overwhelmed. This guide will walk you through the necessary step. It will help you understand what it takes to make a movie in all its glory, from coming up with an idea for your film to creating an actual script for all stakeholders. Now let’s discuss how to make a movie:

First things first, you need to come up with an idea for your movie. Pitching a concept might sound intimidating, but it’s really not that scary. If you want to become a screenwriter, it’s essential to learn how to pitch your movie ideas and gain insight into what makes them compelling.

It’s essential to make sure that your pitch stands out from the thousands of other pitches sent around Hollywood every day—and it’s even more critical that you get the right people’s attention.

It cannot be easy to know how to pitch an idea, especially if this is your first time trying it. Luckily, there are several different types of pitches—and all of them have their own set of rules.

There are many types of pitches, one of the most general ideas pitches is the elevator pitch. In the time it takes to ride in an elevator, you may introduce yourself or sum up a concept with this concise summary (hence the name). The three-act structure is used by movies and TV shows when they break down each act into its own mini-storyline. There are also commercials and radio ads that utilize these writing methods for their short-form content.

However, some basic elements apply across all forms of pitching: You need a catchy title or tagline; a compelling logline or premise; and an exciting story with enough plot points that keep listeners interested through multiple scenes without losing sight of your main narrative arc.

When you’re ready to start selling yourself as a writer, producer, director, actor, etc., be prepared—and practice!

Setting Up Your Budget Filmmaking

You’ll need to figure out how much money you can afford to put into the film. To do this, you’ll need to think about the following things:

Deciding On a Crew

Now that you’ve decided on the script and know your budget, it’s time to assemble a crew. A film crew consists of people who help out on a film set. They can be hired from advertising agencies or production companies; yet, if you’re just starting out, it’s best to hire friends and family members (if they’re available).

A crew has many different roles: some will work behind the scenes while others are in front of the camera.

As a director, you’ll need someone who knows how to operate cameras, lights and how to edit the footage together into a movie. You’ll also need support staff such as producers, writers, or designers for costumes or sets; makeup artists for actors; sound engineers for recording dialogue in post-production; assistant directors with organizational skills; etcetera.

In addition to finding good people with technical expertise in their respective fields, those involved must enjoy working together too!

The next step in producing a movie is choosing your actors. You want to select actors who are good at acting and those who are suitable for the roles you have in mind. To get the best performance out of your actors, cast them yourself. If you’re not ready to take on this responsibility (or if it’s too hard to find time), consider hiring someone else on your team who has experience casting movies and television shows before.

Finally—and this is important—ensure your cast members can work together as a team when filming begins! If they don’t get along off-set, chances are good that their relationship will translate onto the camera. Watch out for any signs of tension between actors during rehearsals or while filming takes place. It may be worth asking each actor individually whether or not they feel like there might be problems working together during production; if so, talk about how these issues might potentially affect the final product later down the line.

Do you need movie production services in Morocco ? drop us an email and we will be glad to help you !

Finding locations is one of the most vital parts of making a movie. If you have a great script, but your sites don’t fit well, your film will be tedious and confusing.

Luckily there are many ways to scout locations for your movie! You can find free places to film or cheap places that match your story perfectly. You can also research location scouts who work in certain areas and hire them for their expertise in finding great locations for movies within budget limits!

You might also want to look into local businesses, organizations, and civic groups interested in helping out on projects like this so they can get exposure by being a part of something bigger than themselves, especially if you’re working with a small budget where every penny counts!

Before doing any filming in a foreign country, it is important to research the laws governing filmmaking and photographers’ rights. Some countries may have strict policies on what you can film, how many people you can bring, and other things. You should also investigate what kind of permits are needed for your shoot, so you don’t get caught unaware when making your movie is time.

Shooting your movie would be a great way to stretch the budget! Morocco is one of the world’s most popular spots for filming, and you can find some fantastic deals on locations if you want to shoot there. It has a variety of landscapes, architecture, and people that will help bring any story to life. You can find locations for desert scenes, mountains for snowy peaks, and even villages with narrow buildings for close-ups of your actors’ faces. Many box-office movies were shot in Morocco, including Lawrence of Arabia, The Mummy, and Gladiator.

Once you have a screenplay, the next step is to FILM! Hiring a filmmaker or cinematographer is best if you want your movie to look professional and be accepted into festivals.

Nevertheless, you can choose to film it yourself with a small crew. If you decide to do this, ensure you have all the necessary equipment before filming begins.

What are the best film cameras for beginner filmmakers?

Many different types of cameras are used for filmmaking, but the most popular one is a DSLR (Digital Single-Lens Reflex). This type of camera allows movie makers and cinematographers more freedom because they don’t require special lenses like camcorders do, saving time when getting ready during filming sessions.

A good place beginners can find out which ones are best suited for their needs would be B&H Photo & Video’s website since they offer great camera prices.

The best lenses for filming

When choosing the best lens for filming, you’ll want to consider the focal length, aperture range, and image stabilization feature. A wide-angle lens is great for outdoor shots or filming in small rooms where you must capture everything around you. A telephoto lens enables you to shoot from a distance and get close-up shots of distant objects without moving too much.

Editing the film is when you get to put all your hard work together and make it into something that’s actually watchable. The first thing you’ll want to do is choose the best editing software for your project. Final Cut Pro, Avid Media Composer, and Adobe Premiere Pro are the most popular editing software for filmmakers. Each of these options has its own pros and cons, but all three are powerful tools that allow you to edit your film and add special effects if needed.

Once you’ve set up your gear, import all of your footage into the software, so everything is arranged in one place. You could also work on an old computer or laptop if necessary—but I would highly recommend having access to a newer laptop or desktop with 16GB+ RAM and a processor speed over 4Ghz just because these tasks require plenty of processing power and memory space.

After importing all of your footage:

The Best Part About Making Movies

The best thing about making movies is the excitement of seeing your vision come to life. When you’re working with a team of people who are passionate about what they do, it’s like magic. You get to make something that will affect others and be appreciated for years to come.

Filmmakers, by virtue of their profession, have the ability to make people happy. You can create something that will bring joy and laughter into someone’s life over and over again. Whether you’re a director, producer, or actor, it’s an honor to be part of something special. If you love making movies, then there’s no better job out there.

When it comes to film-making, the most crucial aspect is to enjoy the process and not worry about making mistakes. Try to be receptive to new ideas, even if they don’t seem like they fit your original vision for the project. Don’t think of every shot as a puzzle piece that needs to fit together perfectly. You can edit it all together later after you’ve filmed everything. Enjoy the journey, and you’re sure to enjoy the destination! You’ll learn from them and make better films as a result.